068: Ross Christifulli on Differentiating in a Crowded Marketplace

Ross Christifulli founded his first brick and mortar company in 2011 at the age of 18. 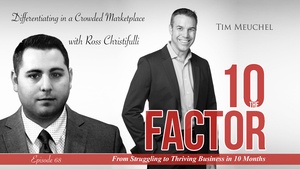 After 10 years of ups and downs all entrepreneurs experience he became overtaken with lead generation.

But generating leads was not enough; he then developed a technology (HFL) that became so powerful it generated over 10,000 in market contractors leads in 2018.

Dumping that many leads into the hands of dealers exposed a weakness in their sales force. This led to the release of a complete lead management software called “Lead Carrot”.

You can watch him at CarrotCon 2019 alongside Shark Tank’s Daymond John paving the way for a new era.

TUNE IN to the 10 Factor, Episode 68 – Differentiating in a Crowded Marketplace.