049: Matt Cubbler on the Importance of Leadership

“A leader is somebody who wants someone else to have success and helps them get there.” – Matt Cubbler 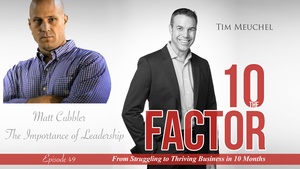 Matt Cubbler has always lived a life of sacrifice and dedication to others. From serving in the U.S. ArmyÂ after 9/11, to working as one of Pennsylvania’s most renowned police officers, to donating his timeÂ speaking to teens and young adults about the importance of leadership in their lives, he has devoted hisÂ life to helping others through both his professional and personal life.

To him these things come naturally. Because after growing up as the son of a single mother and theÂ brother of a mentally disabled teen who was often picked on, Cubbler always knew it was his calling toÂ serve others.Â A month after graduating from high school, Cubbler’s brother Andy died in a violent car accident. ThatÂ moment would end up becoming the single most impactful moment in his life.
While he excelledÂ academically in high school and had an opportunity to attend one of the four major military academies,Â he decided he was needed elsewhere and chose to enlist in the United States Army and served for fourÂ years as an Intelligence Analyst. His Army tour of duty took him from Augsburg, Germany to the PersianÂ Gulf War.

Life After the Military

After leaving the military as a highly decorated soldier, Cubbler began his career in law enforcement.Â Throughout his career, he has worked in almost every facet of law enforcement ? uniformed patrol,Â investigations, under-cover narcotics, and SWAT. Shortly after “9/11,”, he answered the call to, onceÂ again, protect America against Islamic Extremists who were inflicting terror all over the world. He wasÂ one of only a few thousand select individuals (out of over 900,000 applicants) to be hired by the newly formed United States Federal Air Marshal Service.
In 2006, Cubbler returned to local police work and he published a memoir that detailed his life with hisÂ brother entitled A Brother’s Love: A Memoir. In 2008, to help raise money for charities established in hisÂ brother’s name, he ran 78.8 miles across the state of New Jersey. His level of love and commitment toÂ keeping his brother’s name and story alive has inspired thousands across the country.

In 2009, Cubbler got bit by the entrepreneurial bug and he launched his first company MaxOut, a uniqueÂ fitness brand that owns a unique piece of patented strength training technology and owns and operatesÂ one-of-a-kind gyms utilizing this same technology. Over the past eight years, while still working full-timeÂ as a police officer, he has built MaxOut into a national brand that has helped thousands of peopleÂ achieve strength and fitness levels unseen in the fitness marketspace.

Today, Cubbler is still a full-time police officer, the COO of MaxOut and a sought after public speakerÂ who captivates his audiences through his personal story of struggle and triumph, his leadership trainingÂ program based on his experiences as a soldier and his law enforcement officer and most importantly hisÂ life living with his best friend and brother whose life and death has inspired all that he has accomplishedÂ since that fateful day when Andy died in 1989.

In this episode of The 10 Factor find out: